The Dutch Research School of Philosophy (OZSW) and the Erasmus University Rotterdam invite ReMa students in philosophy to register for the 2014 OZSW ReMa Winter School, to take place from 11-13 December 2014.

The OZSW Winterschool 2014, is hosted by the Erasmus Institute for Philosophy and Economics (EIPE) and the Faculty of Philosophy at Erasmus University Rotterdam.

If places available, also open to

Philosophy, Policy, and Social Science
How can philosophy contribute to public policy and the social sciences?
The social sciences face several unique challenges: they deal with individual and collective human behaviour, there is little by way of laws and regularity to guide their inquiry, and collecting and judging evidence is fraught with difficulties and ethical commitments. At the same time, policy-makers increasingly like to claim that they rely on social scientific findings to guide their decisions. What can we say about these aspects of public policy and social science from a philosophical perspective?

14.00    Welcome and Overview of the Programme: Philosophy, Policy, and Social Science (Constanze Binder and Conrad Heilmann)

14.30    Invited Lecture: Models of Evidence for Policy-Making I (Attilia Ruzzene)

10.00    Writing for Policy as a Philosopher (Constanze Binder and Conrad Heilmann)

12.30    Lunch Break, with Presentations of Op-Eds by Students

Abstracts  of  the  Invited  Speaker  Sessions :

How  shall  we  model  a  pluralistic  view  of  evidence  when  the  goal  of  science  is  policy  making?  In  this  class  we  will  try  to  address  this  question  by:  i)  introducing  epistemic  causal  pluralism;  ii)  discussing  the  hierarchical  model  of  evidence  popularized  by  EBM  (evidence-­‐based  medicine)  iii)  sketching  an  alternative  model  where  evidence  is  integrated  rather  than  ranked.

Public  policy  aims  to  describe  and  change  the  world  around  us.  We  will  discuss  tools  to  analyze  both  of  these  aspects:  For  the  descriptive  aspect,  we  will  discuss  a  philosophical  framework  for  ontology  analysis,  for  the  dynamic  aspect  we  will  look  at  applications  of  game  theory  and  social  choice  theory.

Initially only ReMa student members of the OZSW can participate in this winter school. In case there are spaces left, PhD student members of the OZSW may participate as well. Philosophy students or non OZSW PhD or ReMa students who want to participate need to send an email to Dr. Conrad Heilmann (heilmann@fwb.eur.nl) with a statement from their supervisor about their excellence and the relation between this course and their studies (max 10 lines).

During the winter school non-local students will be housed in the StayOkay hostel in Rotterdam. The costs of accommodation are included in the registration fee of 30 euro. Students will share a room with 3-5 other students. 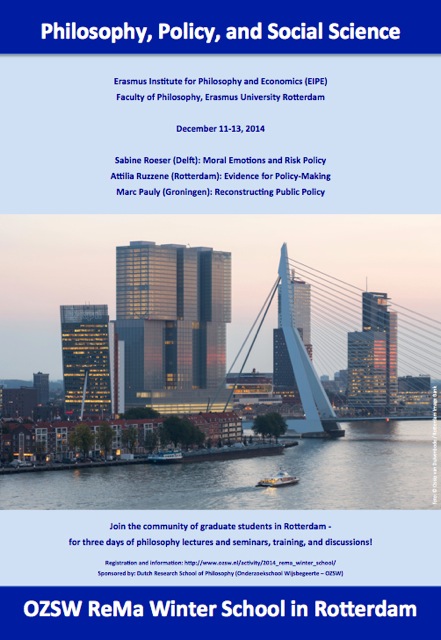 For questions on the contents of this course, please contact the coordinator at the following e-mail address: heilmann@fwb.eur.nl.

On Self-Identity in High Modern Age